The River of Light was Liverpool’s contribution to the UK’s annual Guy Fawkes Night for 2016. A joint venture between the Liverpool and Wirral councils, it saw celebrations on both sides of the Mersey, culminating in a floating firework display in the middle of the river.

Determined not to come home with any more unplanned pets this year (following last year, when we went to a local display and ended up with two goldfish), I decided to take my two girls into town to see the River of Light.

It’s been a few years since the city’s main firework display was on in the centre of town –  it’s been out at Sefton Park for a while, which is a great venue, but not so easy to get to as the city centre for many parts of Liverpool – so I was excited to see what the evening had to offer.

After a stop-off in town to stock up on woolly hats, scarves and gloves, we headed towards the Museum of Liverpool.

Just in front of the museum, we found the Bring the Fire Project just kicking off what looked like a run-through of their performance for the evening. They had dancers dressed in black with Guido Fawkes-mask face paint, accompanied by a troupe of drummers.

Even though it looked to be a rehearsal (the dancers’ firesticks weren’t yet lit), it was great fun to watch, and they gathered a sizeable crowd. And it still being light meant I could get a few photos of the drummers, who had great rhythm and moves. 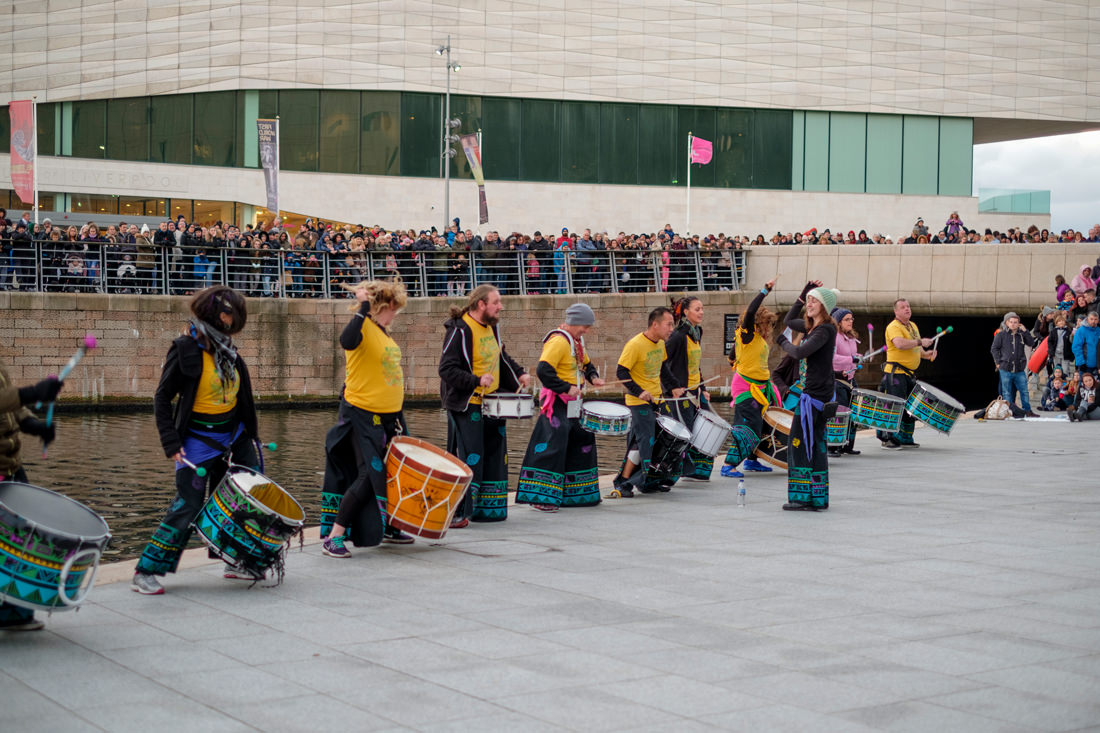 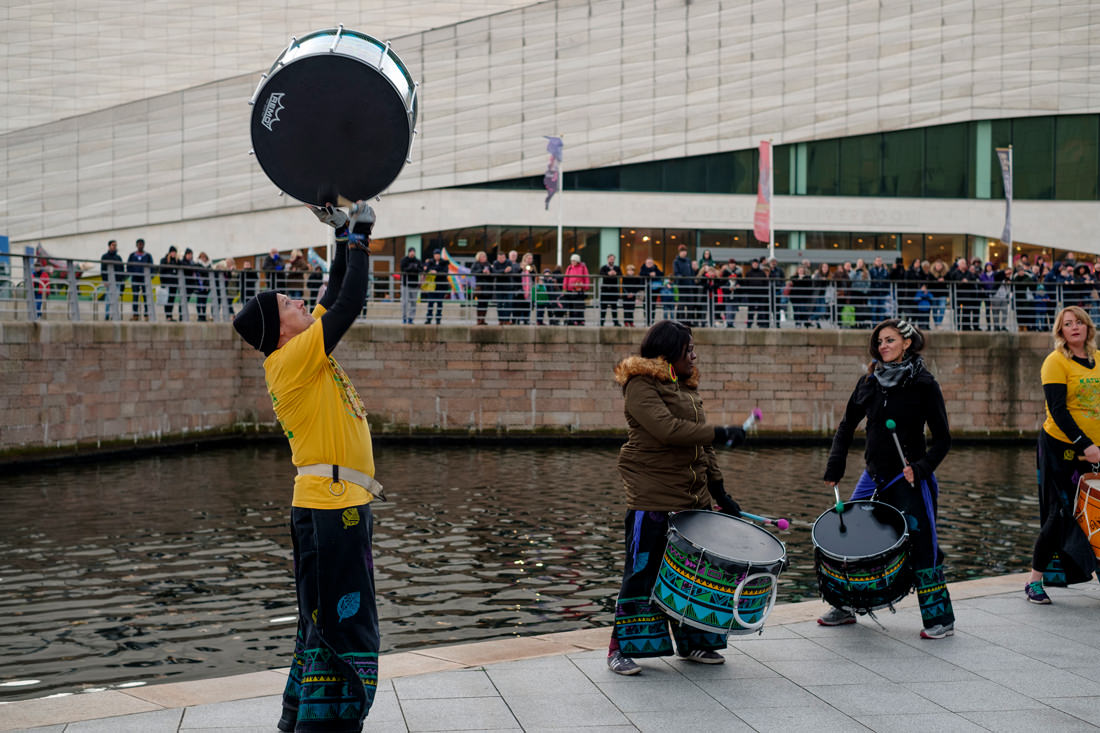 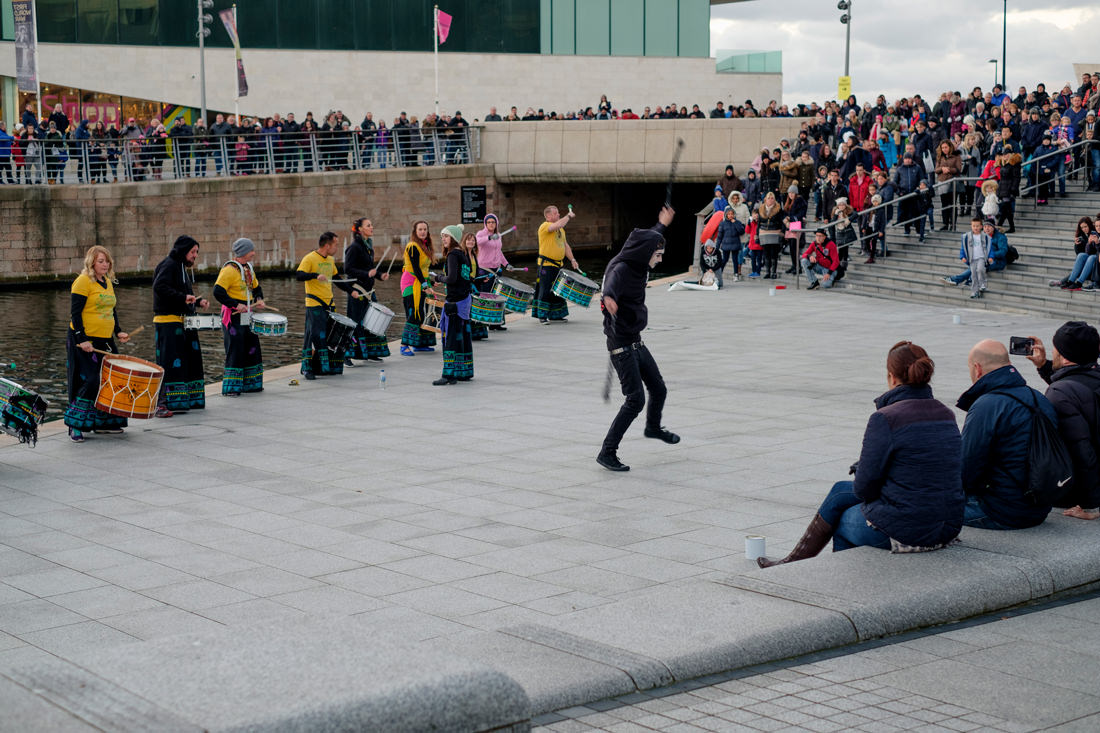 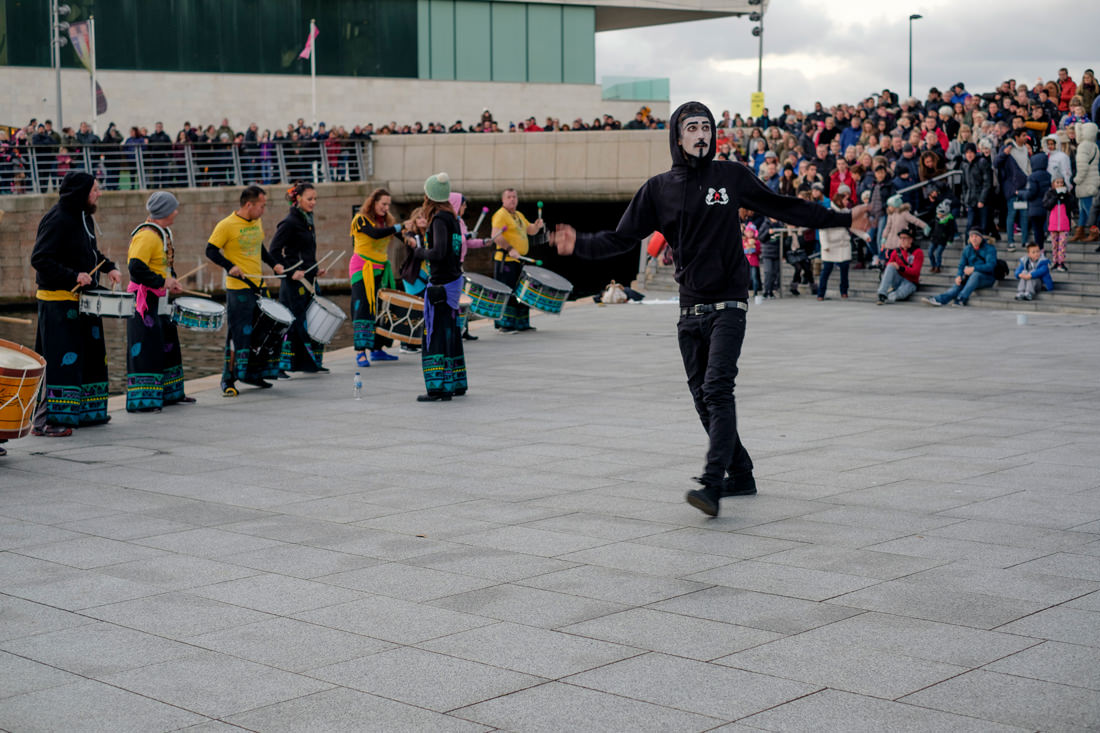 We then moved into the Museum of Liverpool, which stayed open an hour later than usual (thanks, MoL!), serving hot drinks. It was a lengthy queue; it took us around half an hour to get our hot chocolates. But, they were worth it, piled high with marshmallows and squirty cream. Yum!

Our wait meant we missed the aerobatics performance, but Bring the Fire were embarking upon their actual performance. It was dark now, and they had their firesticks aflame, making for a wonderful show. 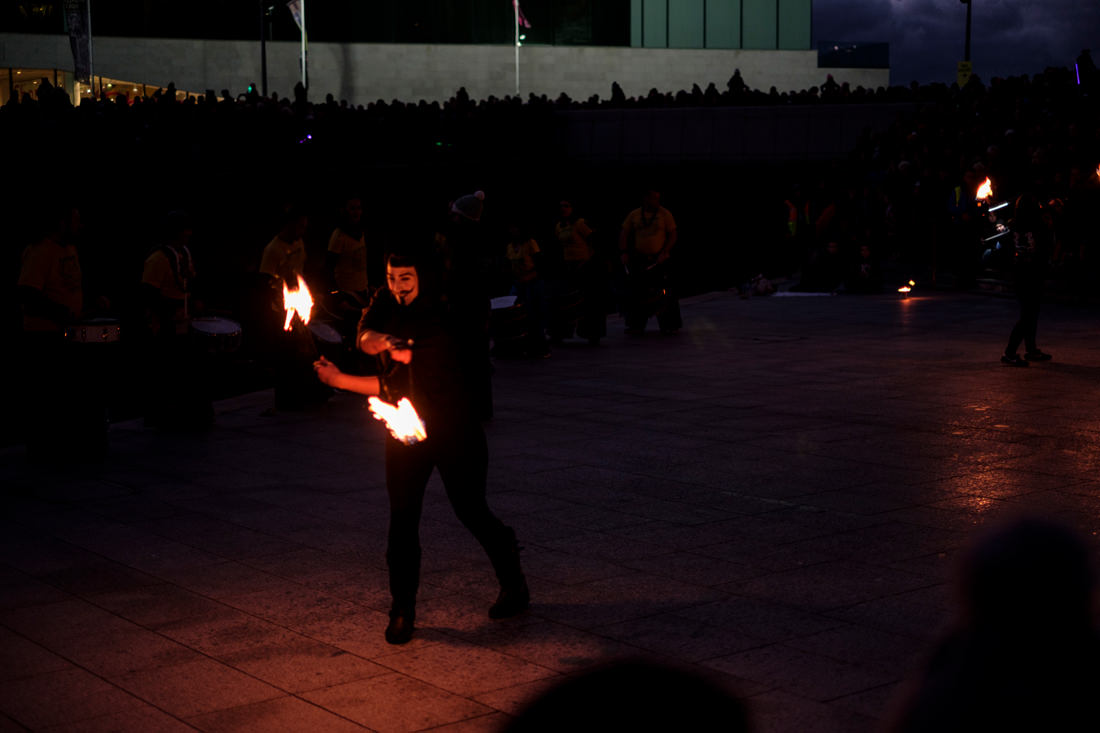 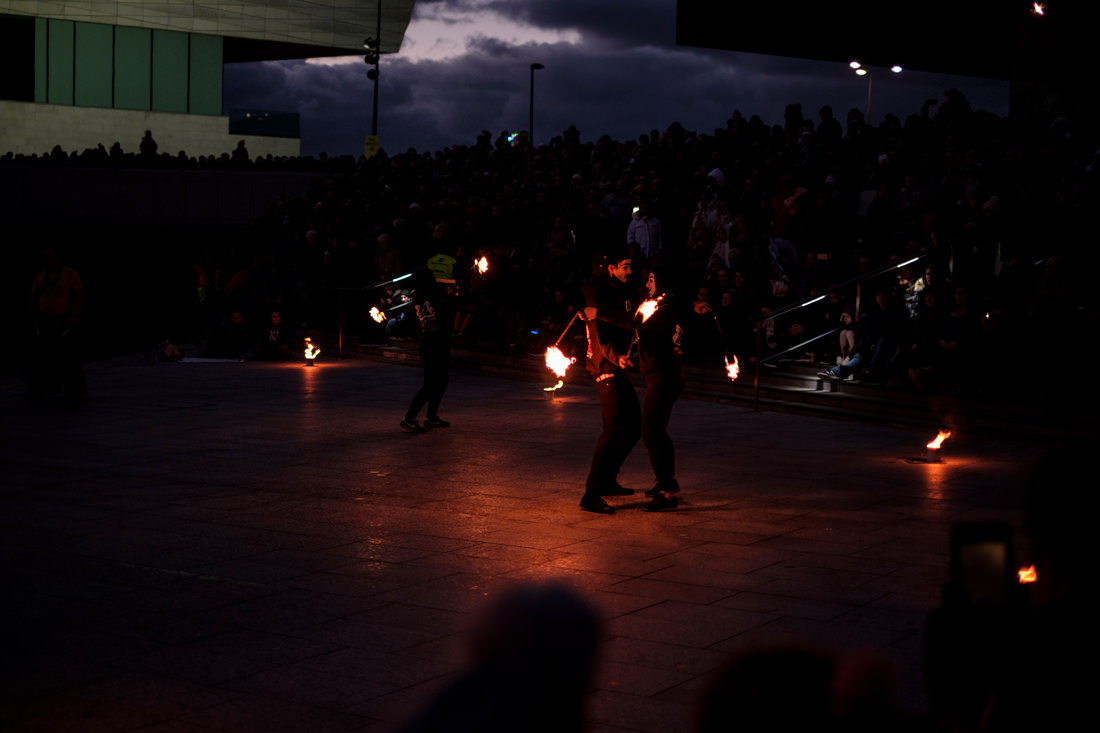 We then went to find the pyrotechnics display put on by Les Commandos Percu andDeabrubeltzak, performing at the front of the Royal Liver Building.

It was just fantastic!

Again, it was percussion based, this time accompanied by fireworks. The beats were frenzied and mesmerising, the performers dressed up in costume, leaping around the stage, the fireworks lighting up the Liver Building and the Cunard Building. 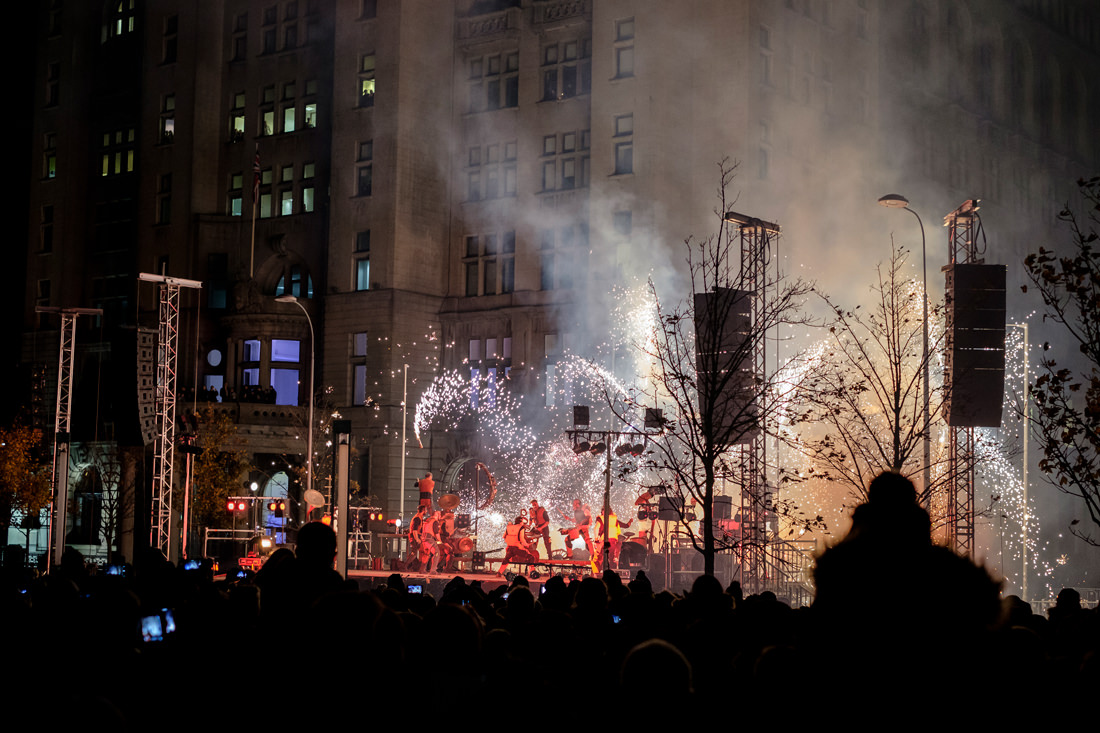 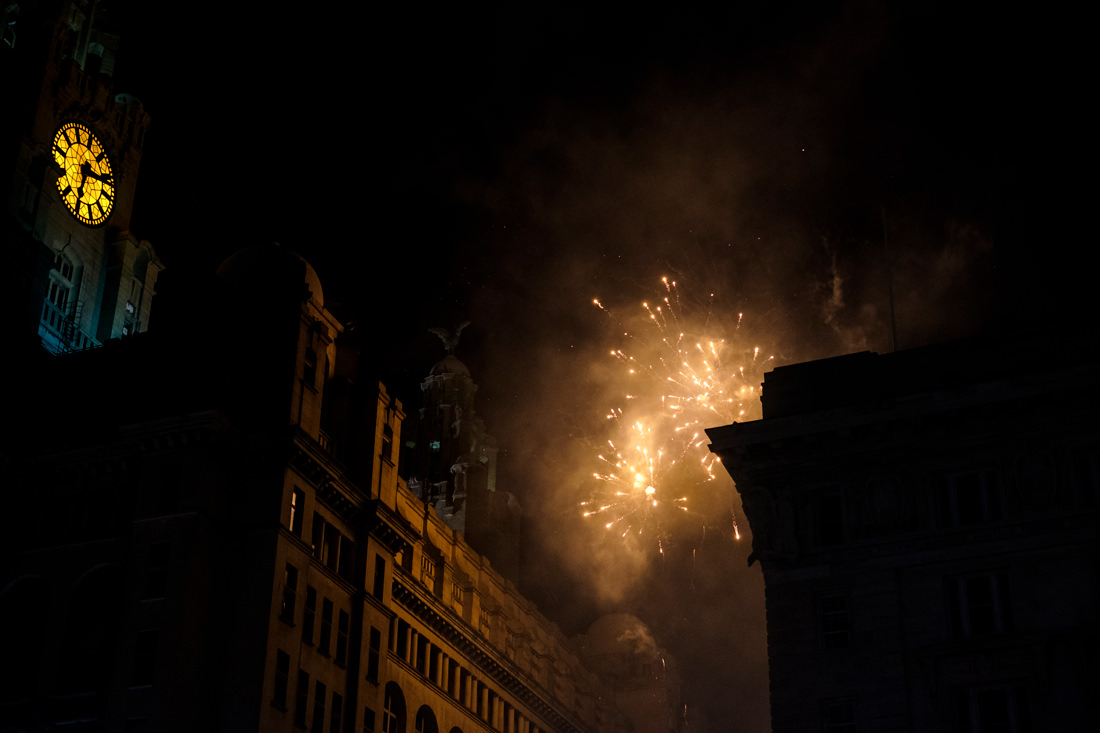 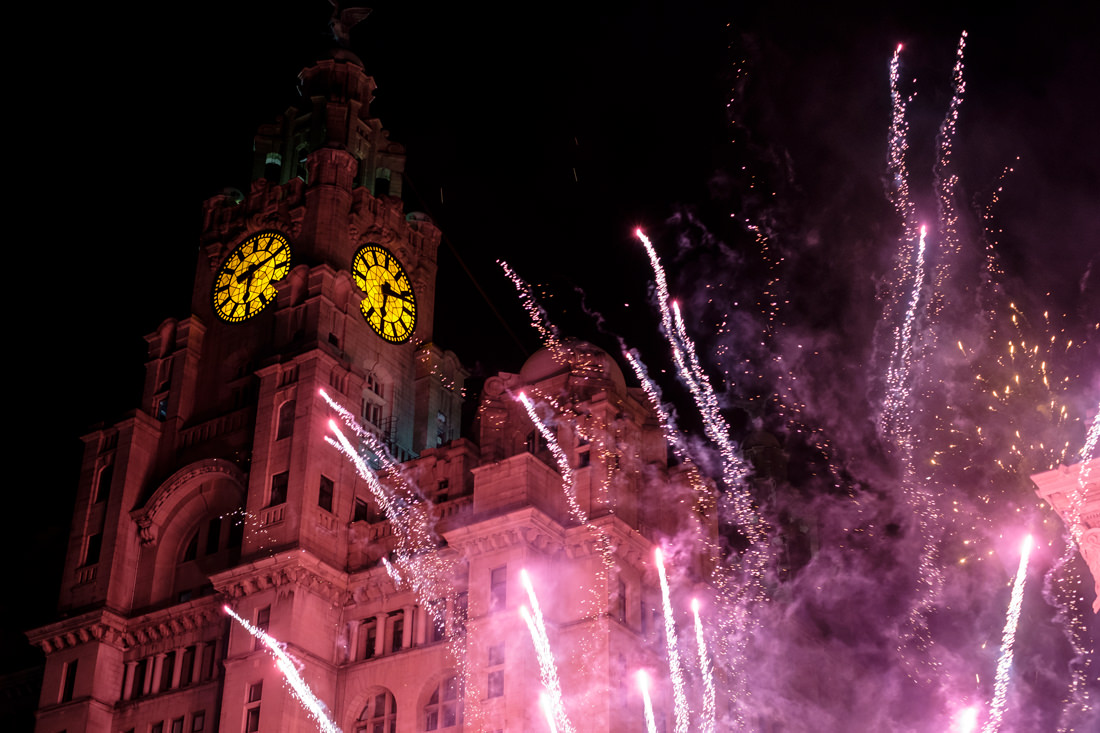 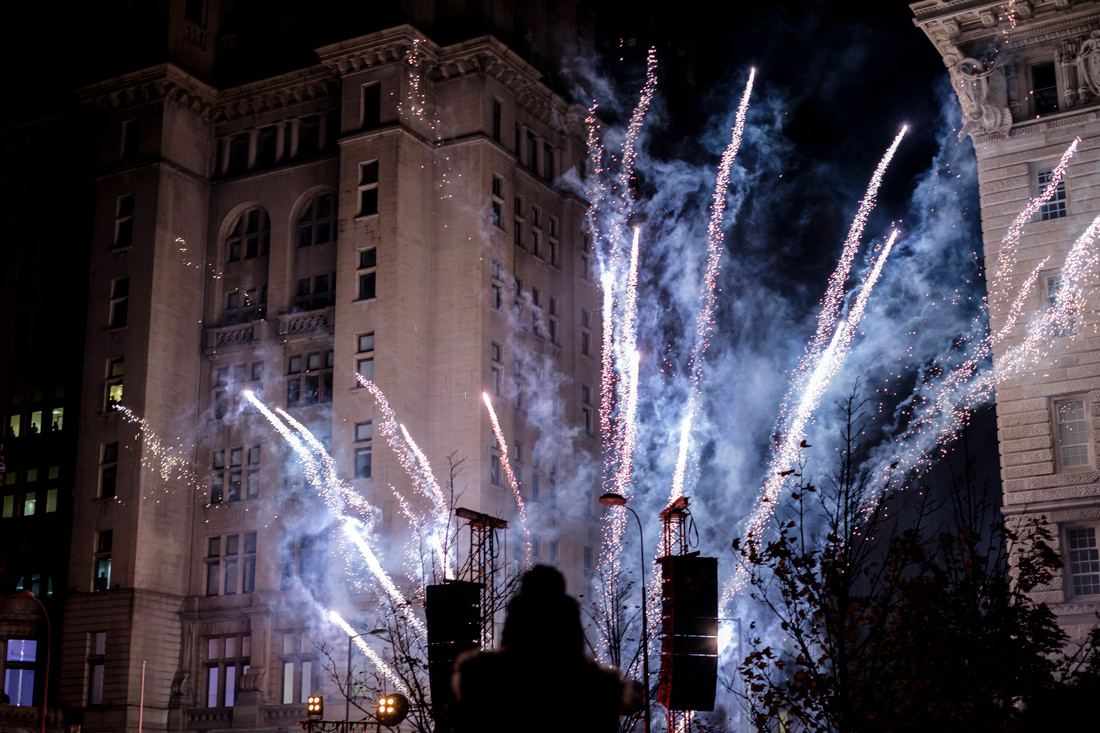 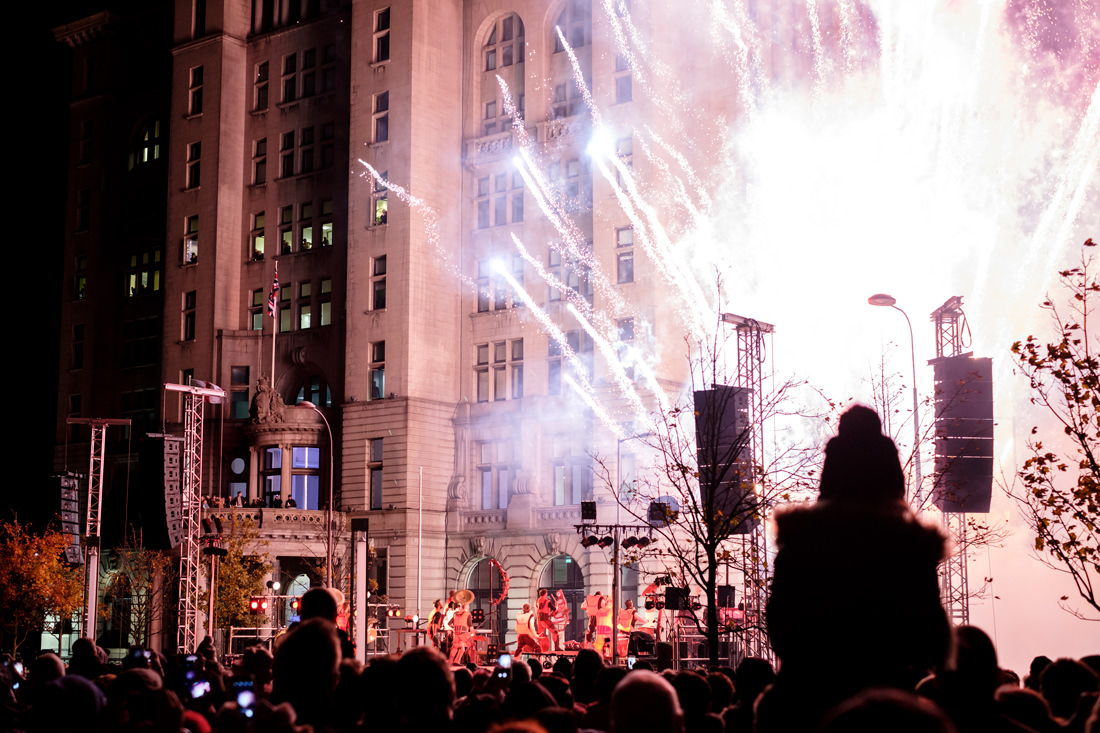 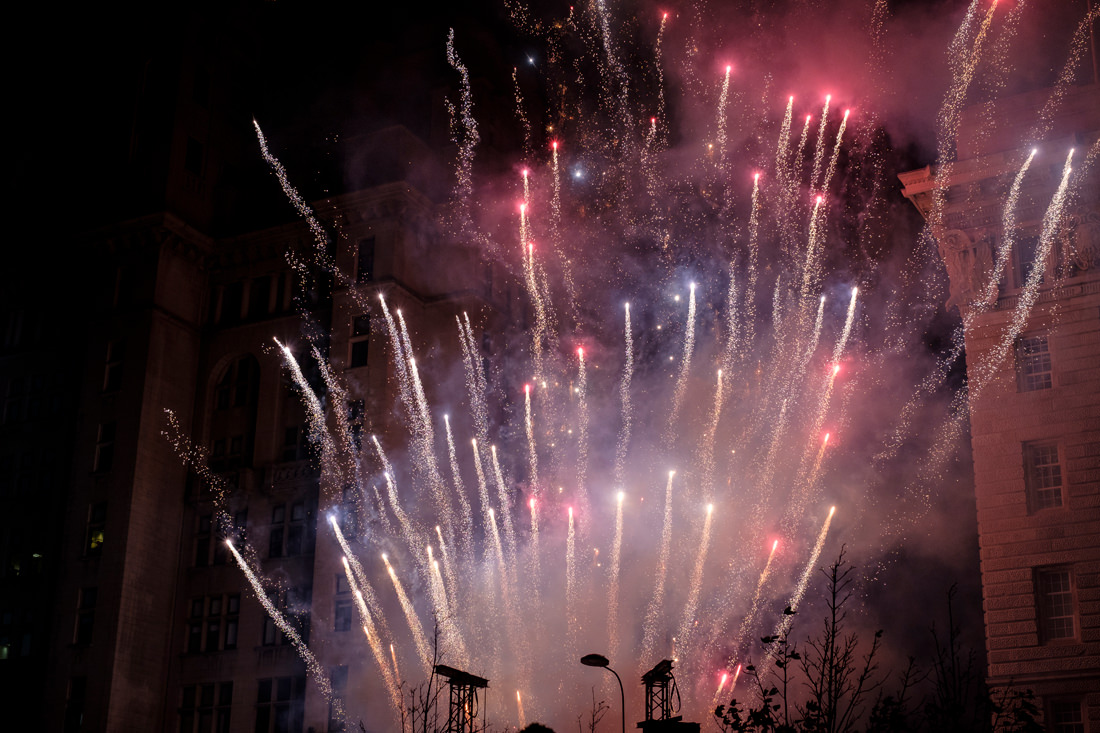 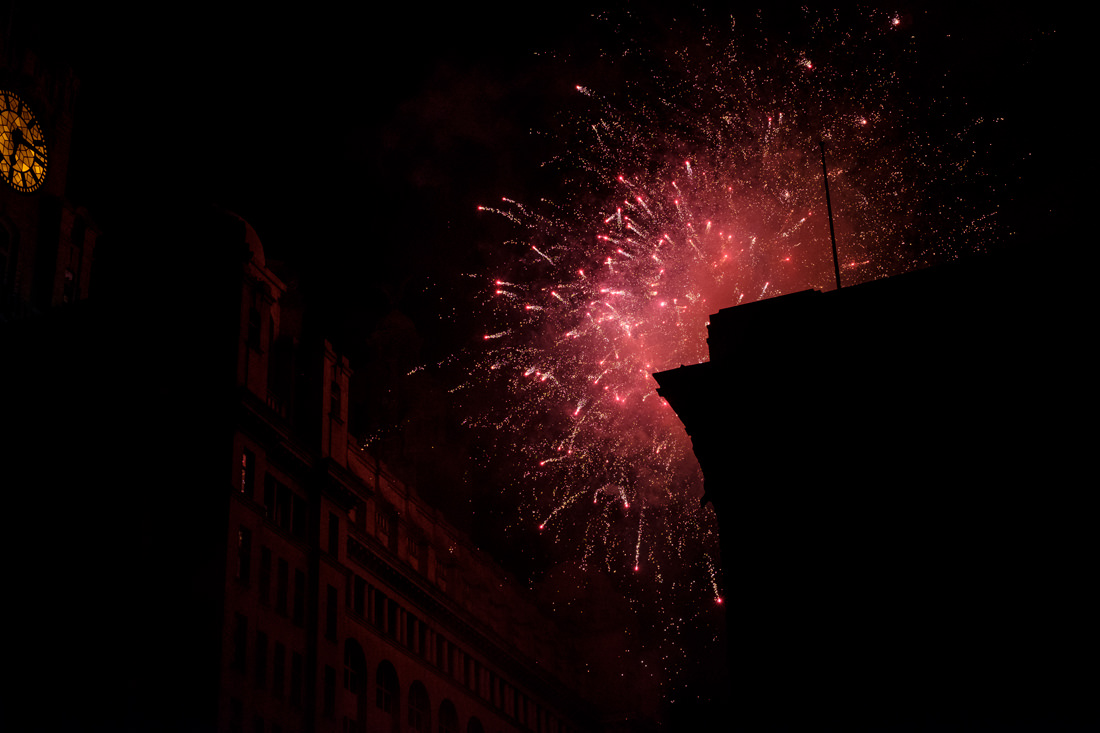 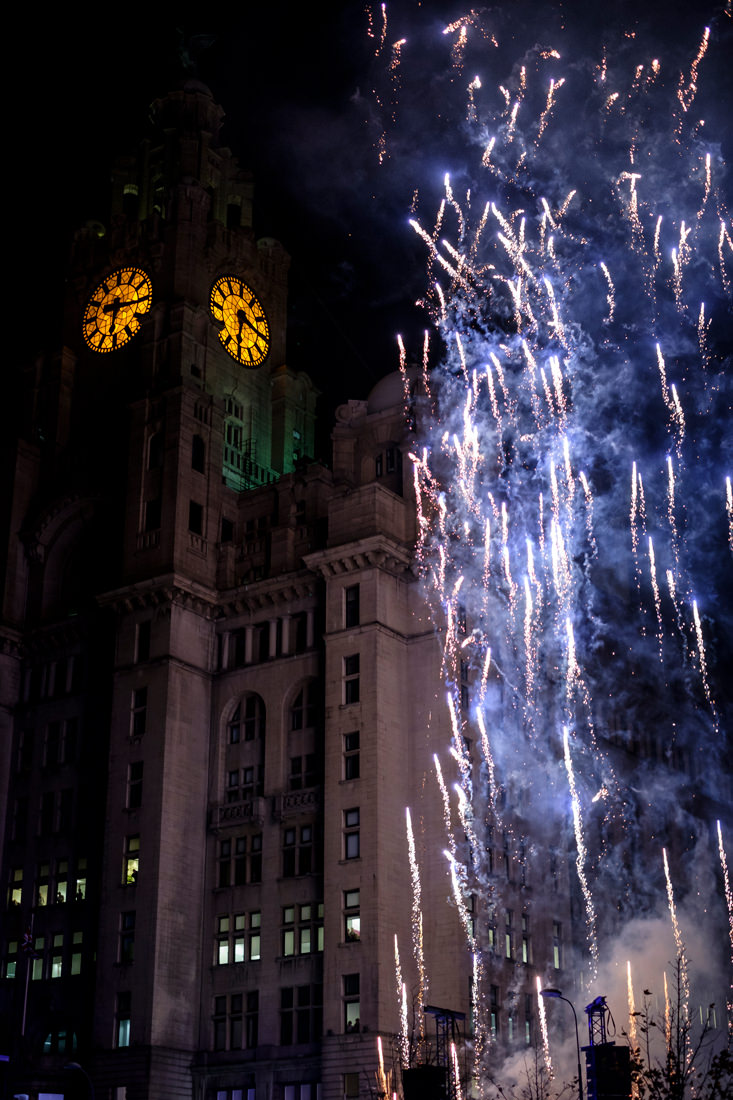 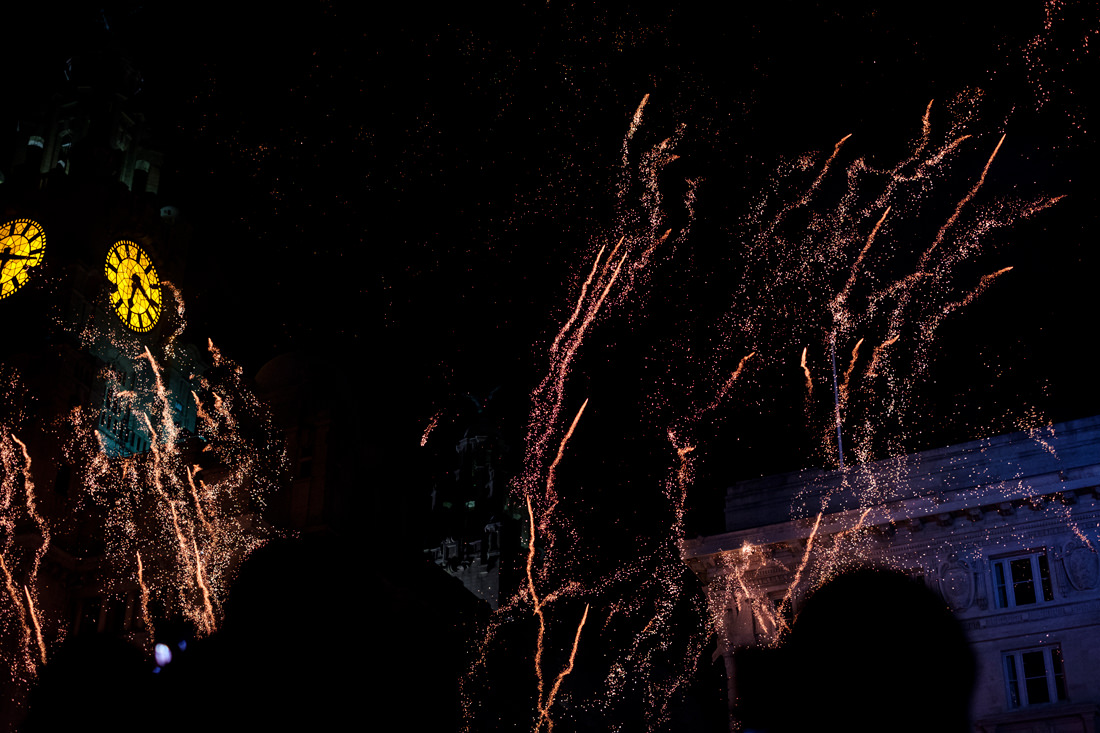 The evening culminated in the river-based firework display. Unfortunately, the crowds were so densely packed, we could barely see a thing, the children in particular.

A couple of minutes into the display, we decided to head back to the car; the children couldn’t see much, and they were bored and tired. These last couple of photos are of the final display, which I took from the entrance to the LiverpoolONE shopping precinct as we were heading back to the car park. 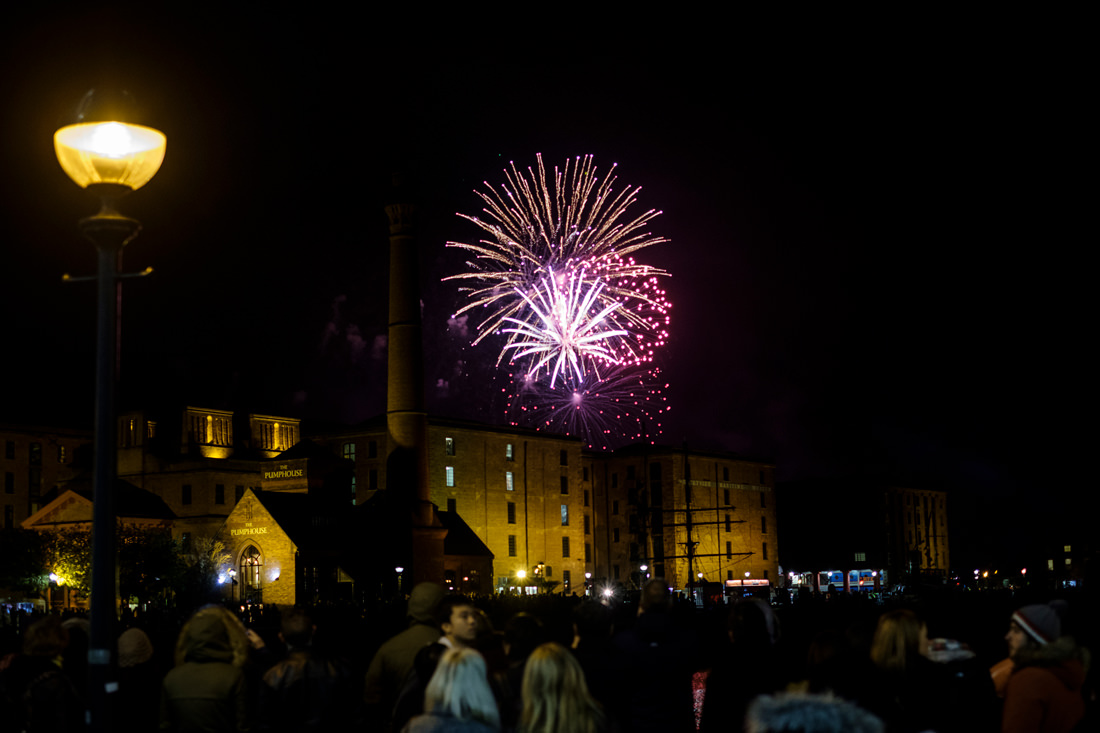 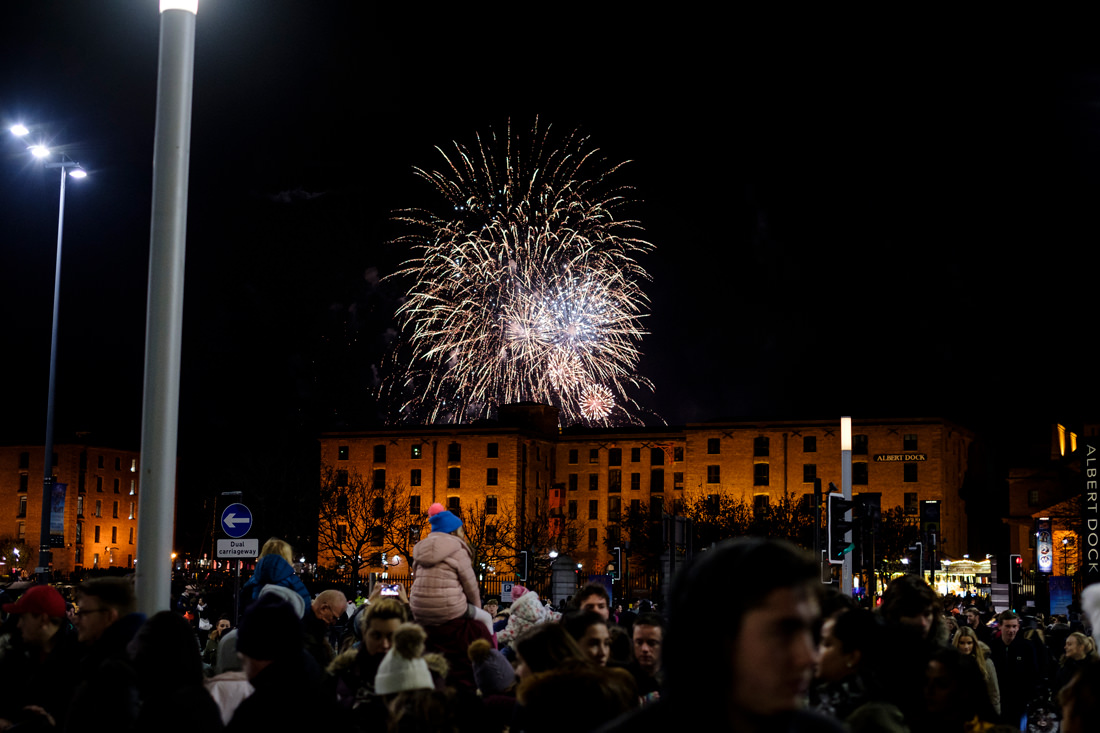 Was the River of Light a washout?

There were a lot of complaints on social media about the River of Light being a poor show. People said they couldn’t see the fireworks on the river at all and there were reports of upset children and demands that next year’s show be returned to Sefton Park.

To be fair, the fireworks were a let down; there were too many people and not enough places to see the fireworks without buildings such as the Museum of Liverpool and the ferry building getting in the way (from my point of view, at least). If it was the only thing we’d come to see, I’d have been peed off too.

However, we enjoyed our evening as we saw some really great performances. My feedback for Liverpool City Council would be the following:

When all’s said and done, if you can make an evening out of the event, then if one part is a let down, you still have other things to enjoy and remember. When I think back to Guy Fawkes Night celebrations from my childhood, it’s not just the fireworks that I think of. I also remember the frosty coldness, kept out with woolly hats, scarves and gloves. I remember drinking hot cups of soup, I remember having to block my ears because the fireworks were so loud, I remember the huge bonfire warming those around it, and I remember it being about lots of people coming together to have a fun, if a bit chilly, evening together.